Despite the inactivity on the blog, the nets were up and open with regularity throughout the autumn and into early winter. Covid restrictions had an impact on the early season ringing and have resulted in lower totals, as below. There have also some changes to the group with John Clarke retiring from ringing after c20 years and Ken taking a temporary step back, but keen to continue again in 2022. On the plus side, Dean Jones has returned to the North Coast following a number of years working as the Warden on Lundy Island, Devon, where he was observing the likes of the Sulphur-bellied Warbler and ringing Wrynecks, Subalpine Warblers etc; birds which we can only dream of up here. David Stirling has achieved his C permit and the two are now set up with their own equipment and rings and ready for action. Steve Fyffe has advanced to his A/Supervisor permit. I have put the ringing on ice so far this year following the birth of my first child in mid-January but I hope to get back into action in spring, although at a reduced level.

Activity was focused once again on the Inch Island Wildfowl Reserve in County Donegal for the Sandwich Tern colour ringing project, the Bann Estuary for breeding/migrating/wintering passerines, Lough Foyle for waders and winter farmland birds, Lough Neagh for breeding/migrating warblers, and the new upland site, referenced in the post below, for breeding birds. I have also marked Portmore Lough below (triangle to the east of Lough Neagh) which will be the site of a trail Constant Effort Site (CES) led by Steve in 2022. 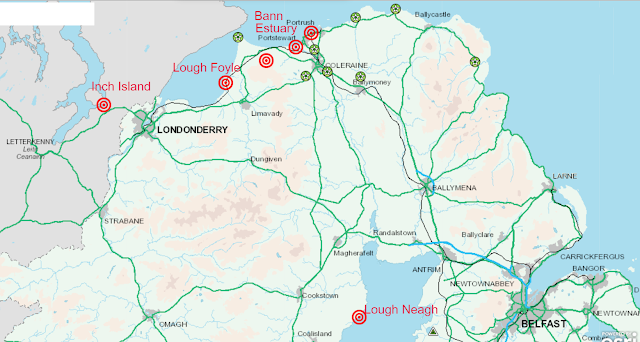 A total of 1549 birds were ringed of 51 species and a further 105 birds retrapped or controlled.

There were no rare or scarce birds ringed at the migration sites but the two Whinchats were a new species for the group. 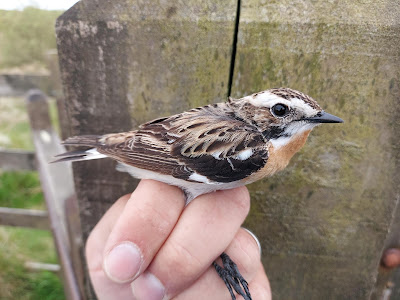 We were able to get out to the local woods to locate multiple pairs of breeding Long-eared Owls but did not have any opportunities to ring them. One Long-eared Owl did make an appearance at our farmland bird site on the shores of Lough Foyle. No sign of any of the local Barn Owls just yet though. 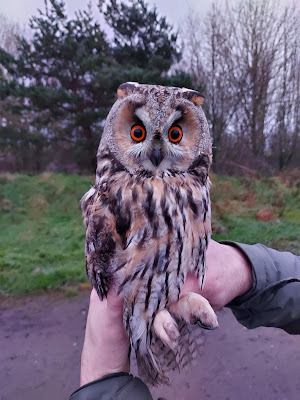 Spotted Flycatcher was another that we seldom ring, and this one was caught randomly on an upland bog, presumably on passage. 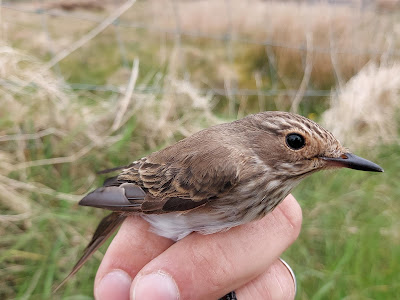 The upland bog site produced a nice range of breeding birds including the Whinchats, Spotted Flycatcher, Jay and two Cuckoos. A Red Grouse managed to escape the mist net it bounced into and would have been a very rare catch. 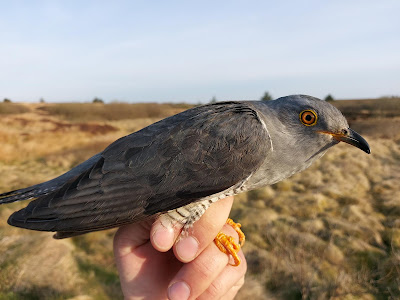 This putative Siberian Chiffchaff (Phylloscopus collybita tristis) trapped in October at Portstewart Strand should also be a new sub-species for the group and we are awaiting the DNA sequencing to confirm or otherwise. 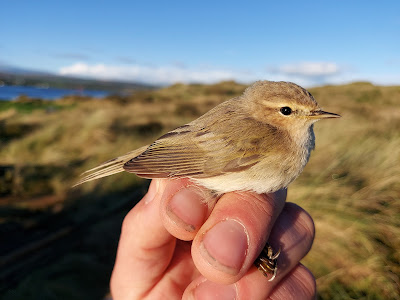 Farmland bird numbers were low, having missed any ringing from Jan-Apr, but four Yellowhammers at the end of the year added a splash of colour. There were also five plus Bramblings present at the site but none caught. 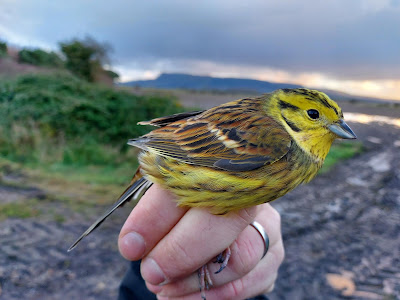 Wader ringing was very limited with one attempt lamping at both Lough Foyle and the Bann Estuary producing just eight Dunlin and eight Redshank. This will undoubtedly be improved in 2022. 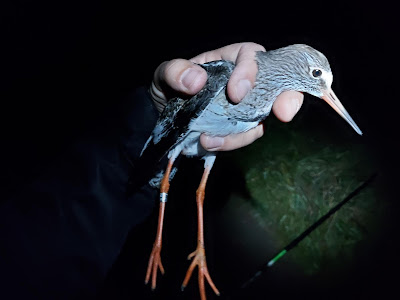 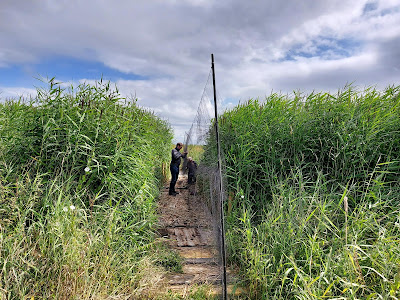 The reedbeds along the west shore of Lough Neagh were again very productive with 552 new birds across five sessions, including 365 Sedge and 86 Reed Warblers. Recoveries included a Blackcap to County Roscommon 3 years later, a Sedge Warbler to Wales, one Sedge from Dorset and two local movements along the Lough Neagh shore. 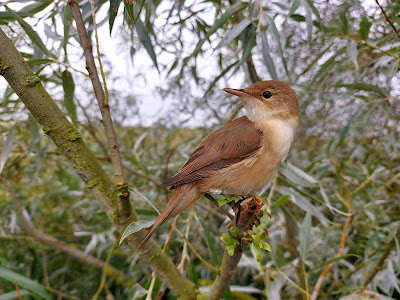 It was our third best year for Willow Warblers with 73 new, thanks to the 41 ringed at the upland bog. This will hopefully increase our chances of our first recovery of this species 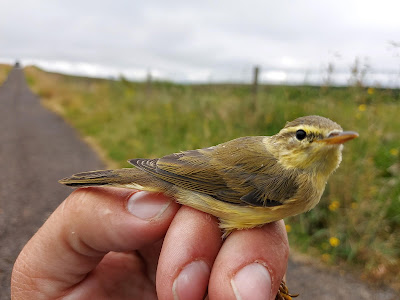 We haven't caught many Lesser Redpolls in recent years in the absence of garden feeder ringing so the 40 caught at the upland bog boosted numbers. A Dutch redpoll ringed in October 2020 at Heisteeg, Tilburg, Noord-Brabant, was a nice catch. A second recovery was also received from Yorkshire, England, originally ringed in November 2020. 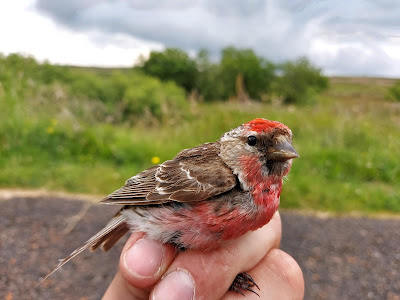 Four Wheatears were nice, all caught in mist nests in scrub. Three of these were Greenland Wheatears (Oenanthe oenanthe leucorhoa). The four matches the total in 2014 (4 pulli) and just the 9th-12th ringed by the group. 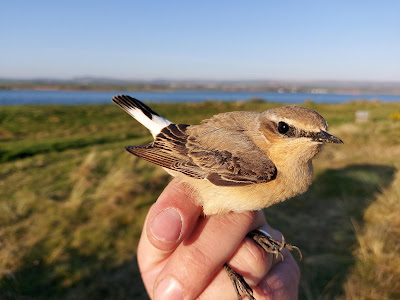 Ken continued his nest box studies on Blue and Great Tits, although now studying around 10% of his former very large project at the Ulster University campus. Just two visits were made to catch Storm Petrels near Portstewart with 48 caught in total.

Further recoveries included a Sedge Warbler and Sand Martin to the Loire-Atlantique area of western France and some more UK & Ireland Storm Petrel movements. The colour ringed Sandwich Terns were again appearing in the UK and South Africa and will be covered at another time. There were plenty of colour ring sightings including Ringed Plover, Oystercatcher, Black-headed Gull, Lesser Black-backed Gull, Herring Gull, Sandwich Tern, Whooper Swan and Brent Goose - I may cover our recoveries in another post which now top 400.

A very quick round up of the year but hopefully the updates will be a little more forthcoming in 2022.

Posted by Richard Donaghey at 10:11