In June 2019 we began our Sandwich Tern colour ringing project with the first cohort of 30 ringed. In the first autumn (2019) we got six recoveries of five birds:
Three travelled the Ayrshire coast of Scotland (one bird was recorded at two sites)
One travelled to Rhos Point, Conwy, Wales
One travelled to County Wexford

As Sandwich Terns do not reach sexual maturity until 3-4 years old, we don't expect to see the first returning birds back until 2022 but it will be interesting if any non-breeding birds return sooner. 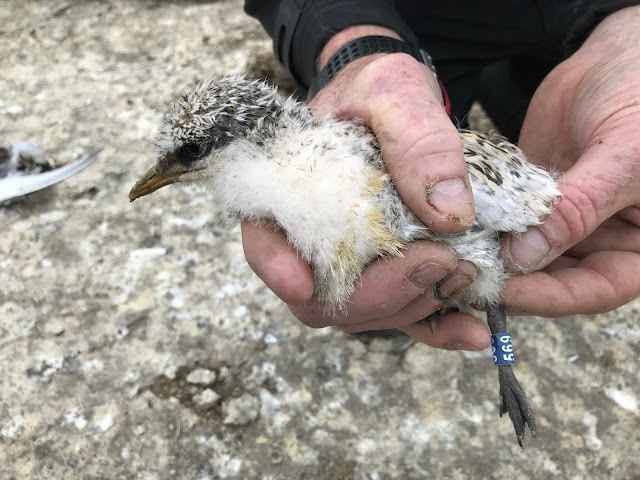 The plan for this year (2020) was to really focus on colour ringing only and not place any focus on metal ringing birds. To avoid excess disturbance on the islet which supports a few thousand breeding birds (Sandwich Tern, Black-headed Gull, Common Tern, Mute Swan, Tufted Duck, Mallard) we are limited to an hours visit to land and depart. Unfortunately, as everywhere, the Covid-19 pandemic scuppered plans with tight lockdown restrictions meaning travel to Donegal and bird ringing was not permissible until June. The visit took place on June 15th but with social distancing measures in place, only two people were present, myself and Martin the NPWS Ranger. With very low water levels in the lagoon we had a new mode of transport with two paddleboards which worked really well. 39 well developed chicks were ringed 531-570 which now means we have 69 Sandwich Terns bearing colour rings.


We are very keen for your sightings so if you see any of our birds, please send the sightings to Richard.Donaghey89(at)gmail.com 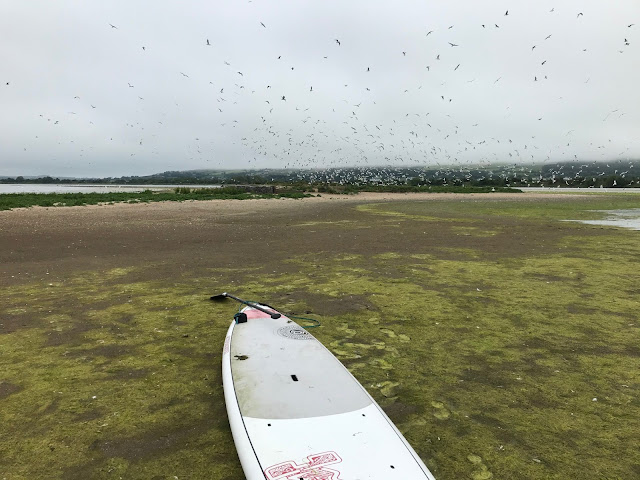 All the colour ringed Sandwich Terns are marked at the Inch Island Wildfowl Reserve on a small islet in the centre of the man-made lagoon. The site is owned and managed by the National Parks and Wildlife Service who enable access to the islet and we are thankful for their purchase of the BTO metal rings and colour rings. 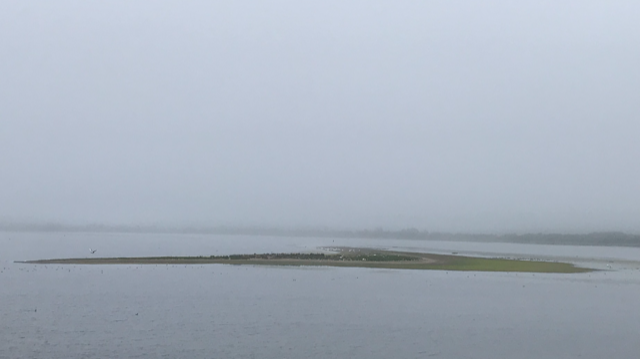 Posted by Richard Donaghey at 21:51 No comments:

The 2019 Bann Estuary Bird and Ringing Report is now available to read.

To check it out, follow the link below or click on the 2019 report link at the top of the side bar (right). 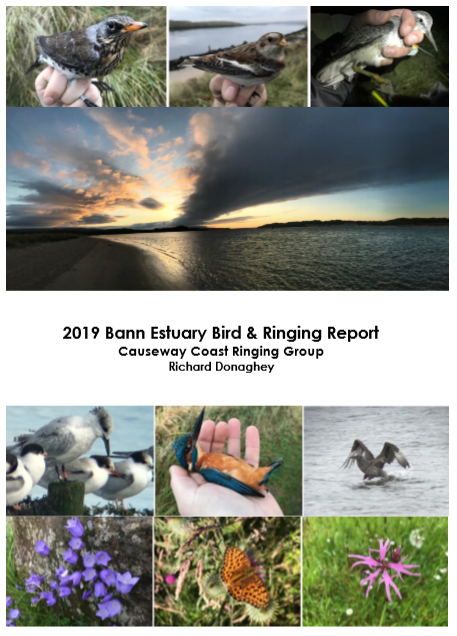 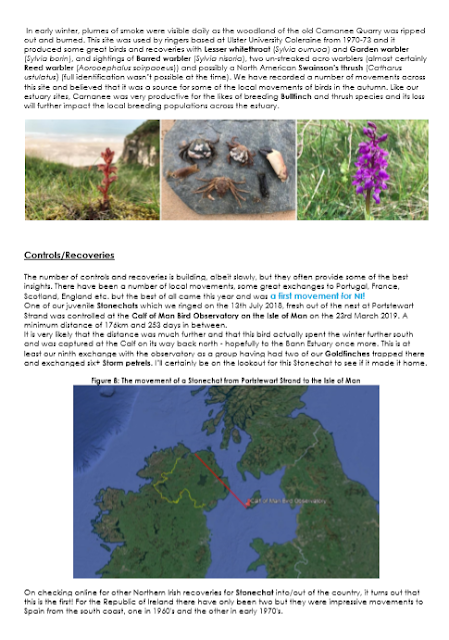 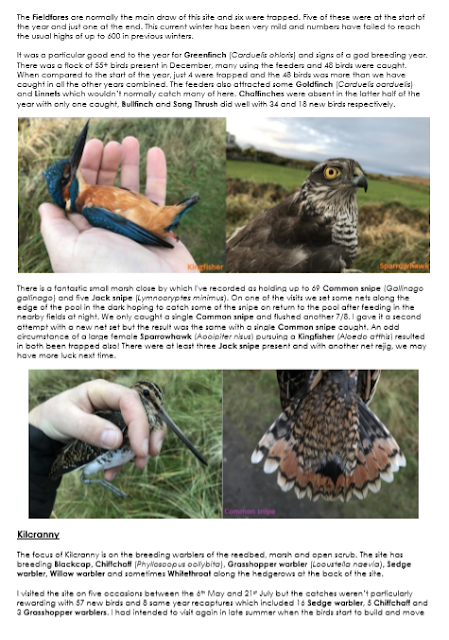 Posted by Richard Donaghey at 20:07 No comments:

The time has come again when we shift shores from the east (north) shore of the Bann Estuary to the west shore at Castlerock Golf Club. As usual the focus here are the nets set amongst the millions of Sea Buckthorn berries which support a nice mix of finches and thrushes.
This year we have finally set up a feeding station with mixed seed and nyjer on offer.
The first two visits were only sample catches whilst we prepared the net rides and set up the feeding station, with the later two visits being more focused on ringing. We have still got two of the net rides to clear but the catches have been steady that we haven't found the time as yet. 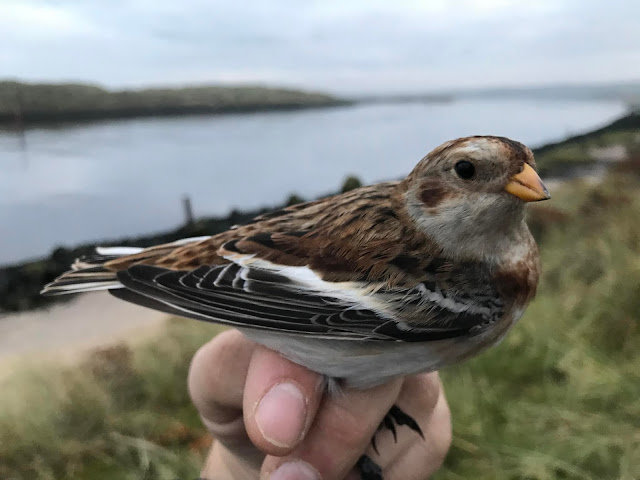 The star bird so far was a Snow Bunting which was caught at first light not far from the feeders. This is the first to be ringed in Northern Ireland since 1998 with possibly as few as 13 ringed in all of Ireland since 1952. 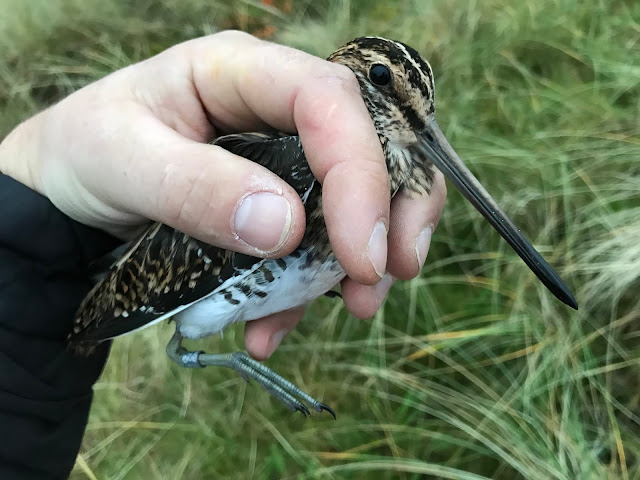 There is a fantastic small marsh close by which I've recorded as holding up to 69 Common Snipe and 5 Jack Snipe. On one of the visits we set some nets along the edge of the pool in the dark hoping to catch some of the Snipe on return to the pool after feeding in the nearby fields at night. We only caught a single Snipe and flushed another 7/8. There were at least 3 Jack Snipe present also and with a little net rejig, we have more luck next time. 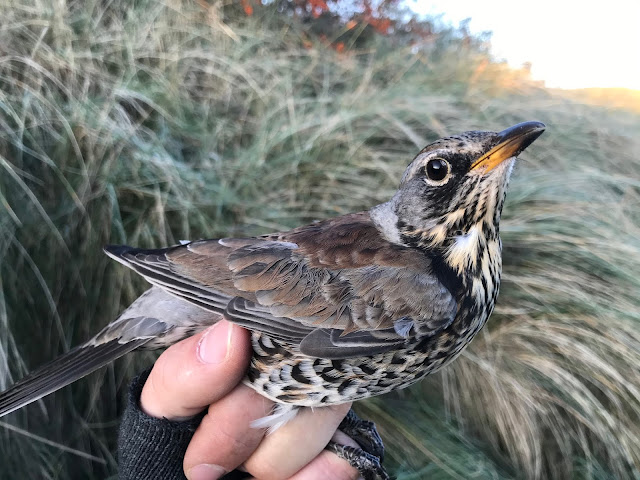 The other catches have been healthy with lots of Bullfinches and good numbers of Song Thrushes present. What has been noticeable in their absence are the Fieldfares with just one seen and caught when the wintering population can number up to 600 and is normally around 100 birds daily. Chaffinches too are absent with one caught and not many more present, usually there are 30-40 and regularly caught.
The feeders have attracted in some Goldfinches and Linnets with a few caught and they will hopefully continue to attract more birds into the spring - perhaps not too many tit species! 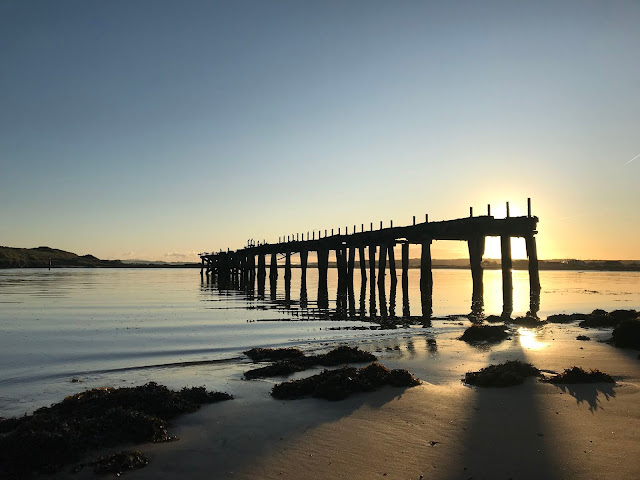 Posted by Richard Donaghey at 22:47 No comments:

After the great success of our Lough Neagh ringing site in recent years we were very keen to get back on the shore and open the nets. Making best use of the bank holiday weekend and a good weather, we decided to go for the first visit on Saturday 13th of July. John and I were short on helpers and lost three people the day before but we were joined by two fairly new trainees in Abbie and Rich K. 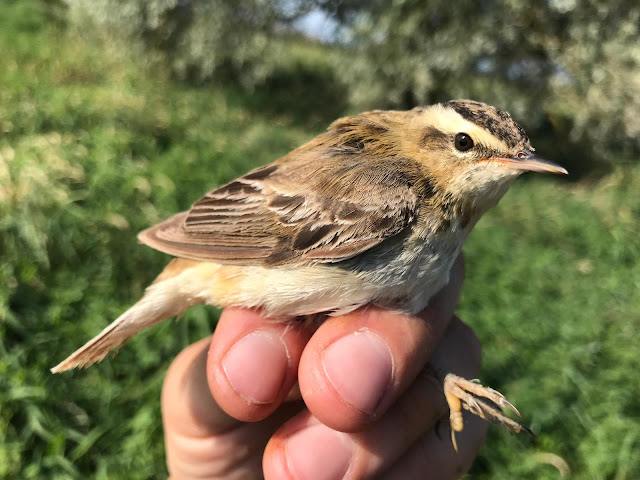 In the last few years, the first rush of birds is usually underway as we are setting the nets, so we decided that an earlier start was needed. We set off form Coleraine at 04.30am, arriving at the parking area around 05.30am, on site 30 mins later after the walk in with the gear and then a further 30 minutes to get the 7 nets (run of 4 & 2) opened.

The catch was another busy one with 119 new birds including another 76 new Sedge Warblers, 10 more Reed Warblers and our first two Grasshopper Warblers for the site. 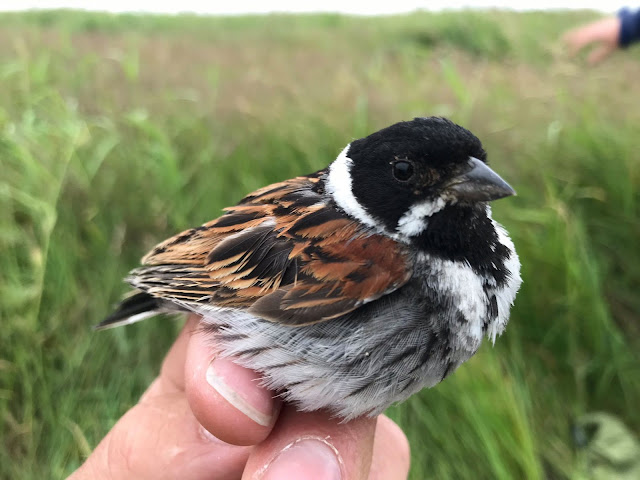 Visit two took place a few weeks later on the 27th of July. We had planned for this morning with a team of 11 assembled but the weather changed & we had to bring it a day forward, leaving it with just myself, Steve, Abbie and also Joe, who had travelled all the way from Donegal.
As usual with the site, the onslaught of birds began at once and two nets were closed early and further two furled temporarily. The birds die off completely by 10 am.
The result was a big haul of 220 new birds which included 20 Reed Warblers, surely an Irish daily record. The 167 Sedge Warblers ought to be up there for a record catch also. 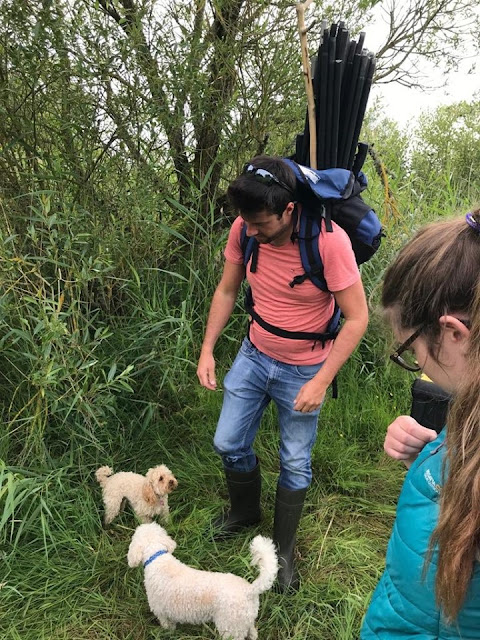 We didn't catch any retraps and given that we have previously ringed 782 birds in 6 visits here, the birds are clearly moving through the site 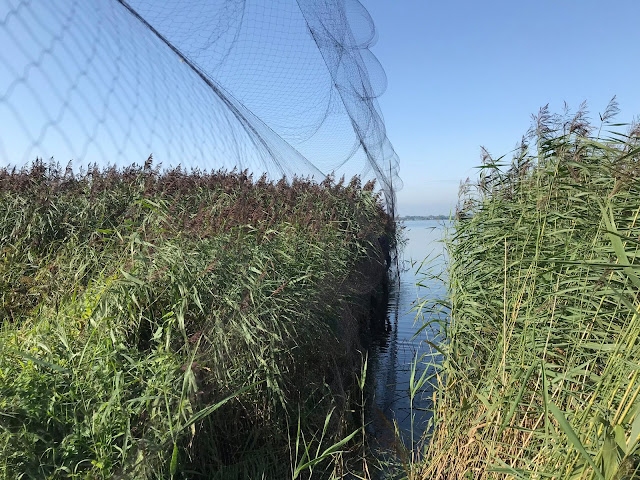 Yet again we managed just the three visits despite all our hopes and talk! Visit three took place on the 25th of August where we had a good team assembled with John, Ken, Jim Mc, Abbie, Rich K, James O and Nathan giving us a team of eight. With extra hands we increased the nets and covered four net sites with nine nets. It was a bright hot day which seemed to effect the birds. It was the first time at Blackers Rock that we haven't had a big movement of birds early doors and instead there was a steady trickle right through, until we took down the nets. There were much fewer birds seen and heard but there were still lots skulking amongst the reeds. We were only really catching birds in the shaded parts of the nets, often just a few feet on some.
It was another healthy catch of 154 new birds, a BTO control Sedge Warbler and a single retrap Blackcap, although we would have liked 300+! 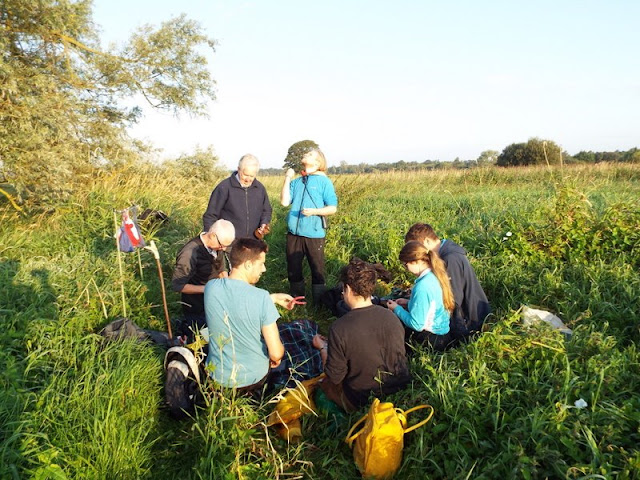 I've totted up the totals and put them in the table below. It was somewhat similar to last year in that the middle visit (27th July) produced the biggest numbers with more Sedge Warblers and the final visit (25th August) produced the greatest species diversity. 491 new birds compared to 2018's 464. 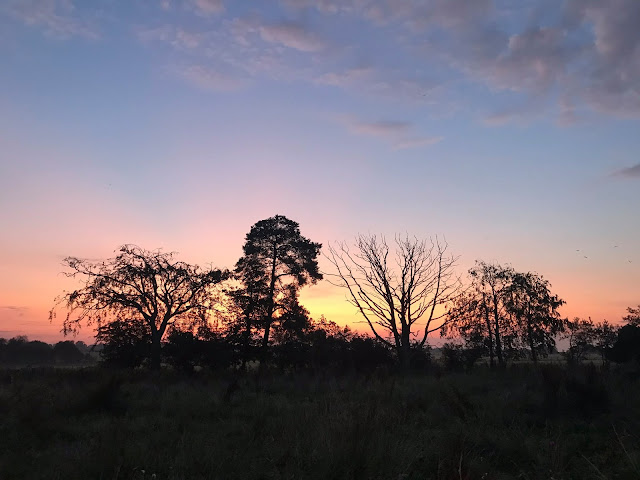 Although we had a great team of 8 for visit three, the first two visits (visit 1 - 13th July) were limited by only having four people present, particularly on visit 2 with two trainees, a C and A dealing with 220 birds which could have been much more. Weather was again difficult and there was a full month between the 2nd and 3rd visits and it twice put off plans of ringing on two consecutive days.
Reed Warbler numbers again peaked at the end of August, maybe they are even better in early September? The catches on the 27th July and 25th August were each record daily catches for Northern Ireland, probably Ireland also. The guys at Traad Point at the north of the Lough have caught 58 Reed Warblers throughout the c10 CES visits so a bumper year for Reed Warbler in the north.
Willow Warbler numbers were almost double this year while Reed Bunting numbers were quite a bit lower after the exceptional catch of 53 new birds on the 11th of August last year. Sedge numbers seemed like they might be a little lower this year after visit one but we caught a record catch of 167 on the 2nd visit, 70 more than our next best days catch.
Just the one control in the form of a Sedge Warbler bearing a BTO ring - it hadn't travelled far, having been ringed at Traad Point CES 10 miles up the shore but pleasing all the same as its our first exchange of birds. 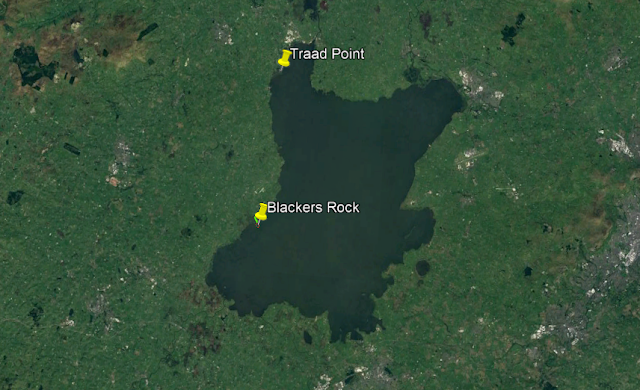 No doubt we will get anther 2-3+ recoveries of birds heading south or on the way back north next spring. We only caught two inter-year retraps and one same year retrap, so we are still missing much of the local breeding population.
Bigger and better next year! (if the Irish weekend weather allows it).

Posted by Richard Donaghey at 20:41 No comments:

I embarked on just my third weekend stay of the year to Copeland Bird Observatory on Friday 25th of October accompanied by Pete, Emily and Ed. This is pencilled in to be the final weekend visit of the season so there was lots of work to be done to get the Observatory closed own for the winter e.g. closing up the traps and bringing catching boxes, storing the bedding/pillows etc.

With a forecast of pretty much strong westerlies all weekend and very little having been seen/ringed during the previous 7 days we weren't going in overly optimistic - but at least it was sunny!

The nets were very quiet with a handful of new birds over the weekend but we did hit gold with a Yellow-browed Warbler. 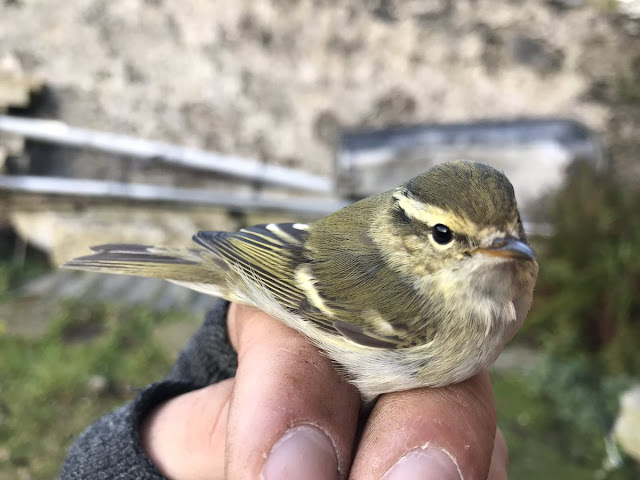 
On Friday night we went out for a spot of dazzling and had a few close misses with Redshank but did manage to catch a Curlew, the first to be ringed here in 32 years and a retrap Oystercatcher which was ringed the year previous on the island. 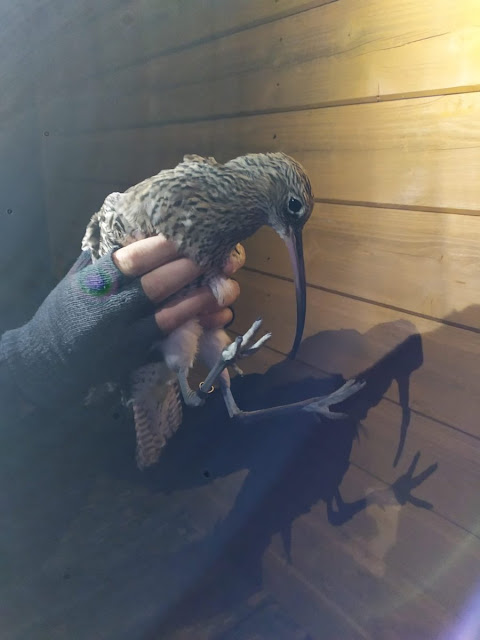 Birds of prey put on a good show with a ring-tailed Hen Harrier quartering the island throughout the weekend and almost flying in to a couple of mist nets. It was joined in the sky by up to four Buzzards at a time and at one stage we had a Sparrowhawk swirling about with them.

Other passage was very limited with a single Redwing, 17 Whooper Swans, 18 Skylark, 1 Lesser Redpoll and the regular cohort of wintering birds. No sea watching was done but there were plenty of Gannets, auks, Kittiwakes passing and one Great Northern Diver was noted passing towards Belfast Lough. Seven Carrion Crow is a good count for Northern Ireland. 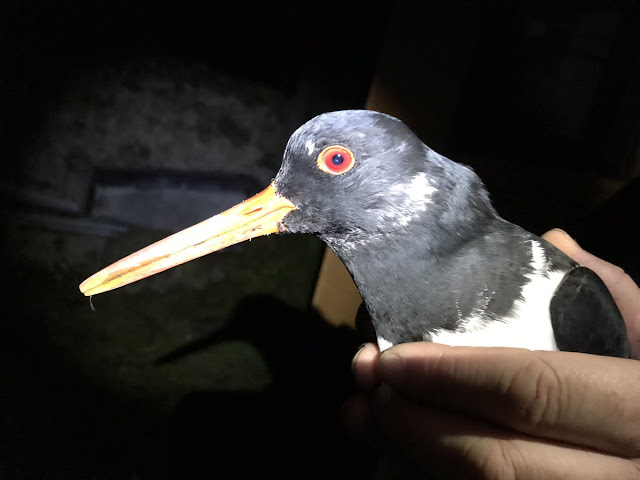 
Posted by Richard Donaghey at 22:47 No comments: